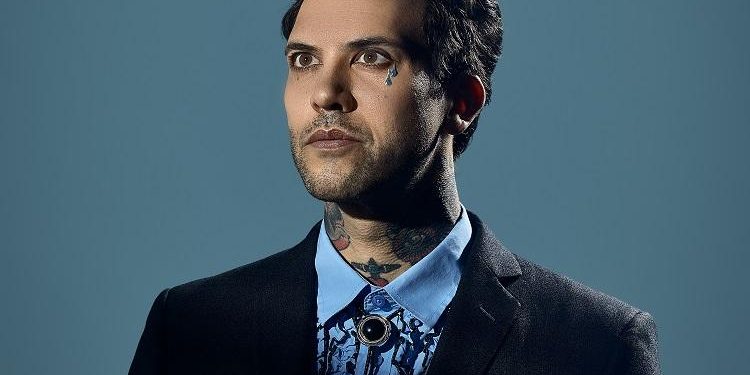 Empty Streets Age of Regret is now available for Pre-orders via Cleopatra Records. The new EP is the sophomore release from modern darkwave act.

The first single, the fabulously melancholic title track “Age of Regret,” is available now via all digital music providers. “This is a song about realizing you’ve made an awful deal with the devil years ago and now you’re in too deep,” says Empty Streets mastermind Aaron Thompson. “ It’s a last gasp of begging for mercy before the tide takes you under.”

The six-track EP represents a catharsis for Thompson, confronting many of his demons and struggles, from growing up the son of a preacher, to living with Tourette’s and mental health issues and the isolation and pressure that comes with being an award-winning adult film star – all the while on a bitter quest to find beauty and redemption.

“Making this record was lonely and painful,” he says. “In addition to creating it at home entirely alone, lyrically I had to confront more demons than I could handle. ‘ Age Of Regret ’ is both a furious howl towards the entire system and an ugly hard look in the mirror.”

Age of Regret was mixed and mastered by Jaime Preciado ( Pierce The Veil ), with whom Thompson worked virtually throughout the entire process. “While working on the new EMPTY STREETS record, a lot of firsts came up for me,” Preciado says. “First time working with Aaron – even though we’ve known each other for quite some time – first time making a record completely isolated from the artist and first time working with an independent artist who got signed during the record process. For me, firsts are very special because you never forget them. I’m thankful and proud to be a part of this first for Aaron!”

Thompson adds, “We developed a very intimate texting relationship, Dropboxing each other files and giving each other notes late into the night. We’ve had a small bromance for years since we both hail from San Diego, and making this record together made me love him more and miss him more all at the same time.”

Age of Regret also features a guest appearance by Faster Pussycat guitarist Ace Von Johnson on the track “Was That Not Enough,” additional production by Ben Weinman (“All You Deserve”) and goth/synth artist Ophelia , and additional mixing and mastering by Shawn McGhee.

Pre-orders for Age of Regret are available at https://orcd.co/dkymyq6.

Age of Regret track listing:
1-Pleaser
2-Age of Regret
3-All You Deserve
4-Millions
5-Hearththrob of the Ages
6-Was That Not Enough (feat. Ace Von Johnson )
7-I’ve Been Riding with a Ghost ( Jason Molina / Songs: Ohio cover)

Though Empty Streets may be new to many listeners, Thompson has a long musical history, in addition to his successful foray into the adult industry under the alter-ego Small Hands . But before he ever stepped in front of the camera to film his first hardcore sex scene, Thompson was setting stages ablaze around the globe with his hardcore rock shows. EMPTY STREETS represents a return to form for this multi-talented artist.

Thompson grew up the son of a preacher in San Diego, California. From the moment he was gifted his first guitar, he turned from humming church hymns to playing the devil’s music on his six-string. In 2003 Thompson stormed the San Diego music scene when he founded the band The Stranger’s Six , for which he was the frontman and songwriter. The band’s infectious live performance sold out notable venues like The Casbah, SOMA and House of Blues, and landed the group shared billing with the likes of 30 Seconds to Mars , TSOL , Panic at the Disco , Dashboard Confessional , The Misfits and The Cult . They were regularly nominated for “Best Punk Band” at the San Diego music awards alongside other local legends Pierce the Veil , Blink 182 , and The Locust . In 2007 The Stanger’s Six signed to Koch Records, and went on several US tours, including the Warped Tour.

In 2012 Thompson joined the band Fenix TX on their headlining European Tour, which covered over 20 countries. That year, Aaron also became romantically engaged with adult film legend Joanna Angel. Thompson first dabbled in the adult industry by writing original scores for her Burning Angel films. But as the pair’s lives became more entwined, he took on more and more roles in Angel’s production team until he eventually stepping in front of the camera as “Small Hands.” Within a few years, Small Hands went from co-staring alongside Angel to winning “Male Performer of the Year” awards from every single adult trade association: AVN, Xbiz, XRCO, Adult DVD Talk, The Alt Awards and The Inked Awards.

In 2020 Thompson returned to music with his solo project EMPTY STREETS , which infuses his hardcore rock and roll roots with a darker, sexier edge. The brooding musical project released a debut EP, Demons , released last summer, which pulled from a variety of heavier influences, including Nick Cave , Nine Inch Nails , Depeche Mode , VNV Nation , while also introducing a number of surprises. Thompson’s talents were soon recognized by Dillinger Escape Plan ’s Benjamin Weinman , who collaborated on Empty Streets for the track “Fracas” on Weinman’s Patreon page. While working the follow-up to Demons , EMPTY STREETS released a teaser of “Age of Regret,” piquing the interest of Cleopatra Records.

Gemini Syndrome Back on the Road for Summer Tour