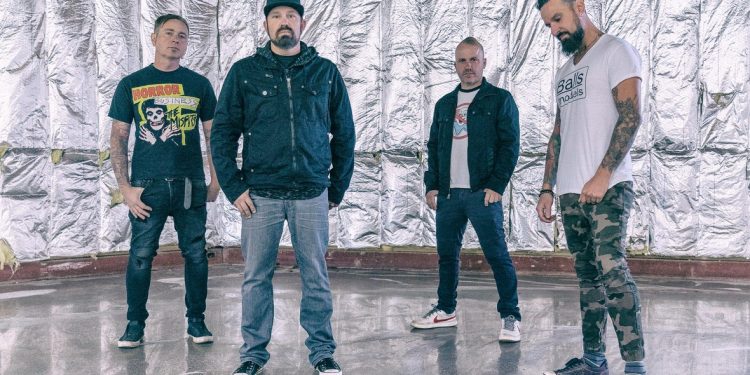 Emperors & Angels released their debut, self-titled album today via Curtain Call Records. The band will be playing Summer Bash Indiana on July 10th at the Waterbowl in Muncie, Indiana.

The band states, “This record is a long time coming. Such a journey to release this and we couldn’t be happier to finally share our passion! Welcome to the Fray…”

Adds Matthew Nevitt, the band’s vocalist, “I have battled insecurities, hatred and confusion for longer than I know. Depression took hold of me without warning. I was in a funk! I was battling an invisible force pulling me deeper from reality and my happiness. Crazy thing is, all this happened while life seemed grand! I dug deep within to provide the darkness, TRUTH and the helplessness I was drowning in. I also shine light and encouragement knowing it wasn’t a doctor. It wasn’t a prescription. No! It was strength found within. I accepted EVERYTHING! My faults, disappointments, failures, anxiety, even faced self hatred head on! I did my best to let down my guard to use my insecurity as fuel to write. I journeyed a personal intervention! ”

Matthew continues, “Writing this album mentally freed me and quite possibly saved me. So if you read through this, I thank you! If you feel any of this hit home. Please know you aren’t alone! We all suffer! Let this album strengthen your desire to be the best you possible.”

The band has released two singles from the record, “Signal the Brave” and “Ready For War.”

An endless war rages within. A battle of attrition to outlast every demon. Finding peace and strength within each and every failure. To learn from every mistake, while accepting defeat, fueling new fire to walk back into the FRAY. We conquer fear to thrive!

We are Emperors & Angels

The band was formed in 2020 by 4 long-time friends and musical counterparts. Each having success on multiple scales, the right time presented itself providing safe passage for Emperors & Angels to surface.

The quartet began writing and soon found producer Paul Trust “Starset” to help mold EA’s sonic assault. After working together on Emperors first three releases, the band decided to self produce. Taking everything they had learned from Paul, Sahaj Ticotin “Ra” and multiple others to EA’s newest measure.

Taking encouragement and advice from famed A&R Diana Meltzer (Wind-Up Records, Creed, Evanescence, Finger Eleven, Drowning Pool and many others) the band is readying for launch 2021. Currently EA has inked a distribution deal with Curtain Call Records / The Orchard Sony.