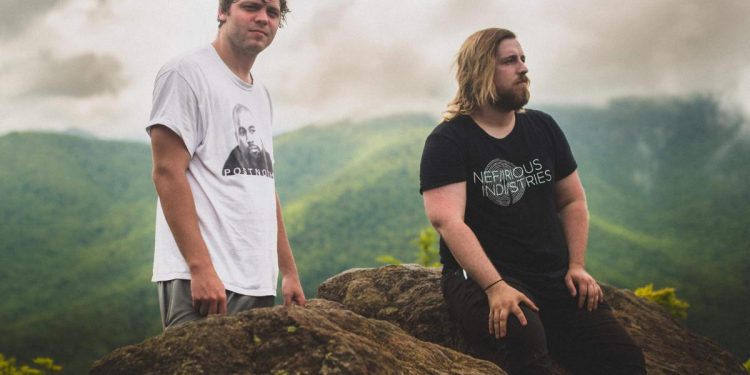 Dying Whale Single “Biblical Image” is the latest from the duo based out of Valdosta, Georgia. The track cpmes off their impending Problem With Immortality EP via Nefarious Industries.

Following a four-year gap in new material since their thundering Last Moments Of Misery album, the band comes slamming back in 2021 with a damaging two-song EP. Featuring two new tracks which showcase the band’s stripped-down and lethal two-man lineup of vocalist/bassist/guitarist Matt Zagorski and drummer Eli Werth. “Destroyer Of Light” and “Biblical Image” were recorded, mixed, and mastered at Earthsound Studios with engineer/producer Lee Dyess (Mayday Parade, From First to Last, I Set My Friends on Fire) and completed with artwork by Alex Miracle.

Nefarious Industries will issue Dying Whale’s Problem With Immortality across all digital platforms on June 25th with a limited vinyl edition to follow late this year. Find digital preorders and merch at Bandcamp HERE and the label webshop HERE.

Zagorski writes of the new EP, “As a band that has been working hard to develop our sound, we have finally hit a point where we are at full steam. With the release of these songs, we enter the strongest era of the band.

“With Eli and I at the helm of the ship, there are no obstacles that can stand in our way. Problem With Immortality is themed around the false claims of religion curing mental illness. Both tracks dive into the topic in a different way. ‘Destroyer Of Light’ is tackling the idea that praying your depression away is a viable option of fixing your ‘problem’ when in reality there is no simple way of curing this. There is no God up in heaven watching down waiting for you to call him to wash away your suffering. It’s up to all of us in pain to find our own path for relief. Sometimes that negatively affects us like it did for the person “Biblical Image” is about. It’s about a person in my life that took an excessive amount of pills, to the point of no return. In his mind, he became the God that he was told to pray to. And he was to fulfill the words of the bible at any cost. Since then, he has received the treatment he needed.

Coming out of the pandemic, Dying Whale is stronger than ever. I spent my stimulus checks accordingly and of course bought recording gear. Eli and I have been working hard on demoing and refining our sound like never before. After a year of unexpected changes, I can’t say exactly what we have in store for the future, just know we are back in full swing, and we both couldn’t be happier to announce that.”

DYING WHALE is writing additional new material and will return to the studio this Summer to record their next LP for release in 2022.