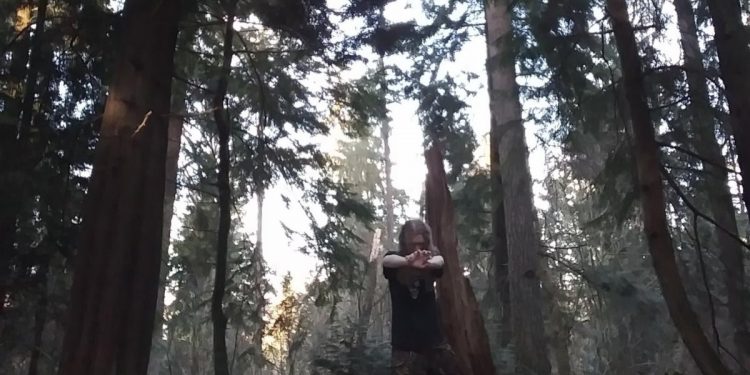 Spawned from the misty woodland gloom of British Columbia in 2018, Dungeon Serpent is the creation of one Arawn, who has taken his time in the creation and refining of the act’s debut album, now emerging with the stronghold World Of Sorrows. With five expansive, brutal, and archaic movements of melodic death metal carnage, the album fuses influence from brutal acts of the genre, citing Intestine Baalism, Molested, Vehemence, and Mi’gauss, with the dense layering of Rotting Christ and Eucharist. Once combined with the forsaken Canadian tradition of hyperblast, the outfit forms a sound that is at once blistering yet also introspective and mournful, a vortex of low, morbid tremolo riffs, maniac blastbeats, vehement guttural vocals, and powerful atmospheric melodies, converging to perfectly embody the somber mysticism and fantasy-oriented lyrics.

With this mix of ideas and sounds, Dungeon Serpent mastermind Arawn proves himself to be well beyond the stale revivalist trends and feeble-minded bland ignorance that plagues the modern metal underground. Channeling obscure and somewhat eclectic influences to create an exciting style of death metal, Dungeon Serpent’s World Of Sorrows was written by Arawn, who performs guitars, vocals, and bass, and programming. The record was recorded January through March of 2021 at 6085 Productions by producer J. Hook who provides additional programming, mixed by Andrew Lee, mastered by Dan Lowndes at Resonance Sound Studios, and completed with interior Illustrations by M. Lin, photography/graphics by Arawn, layout by Arawn and Brandon Corsair, and the cover features Thomas Cole’s “The Course of Empire: Desolation.”

Stream the lead track from Dungeon Serpent’s World Of Sorrows , “Necroscope,” at THIS LOCATION.

World Of Sorrows will be released digitally and on CD via Nameless Grave Records on July 16th. Find preorders at the label webshop HERE and Bandcamp HERE.

Watch for additional audio previews and announcements to post over the weeks ahead.