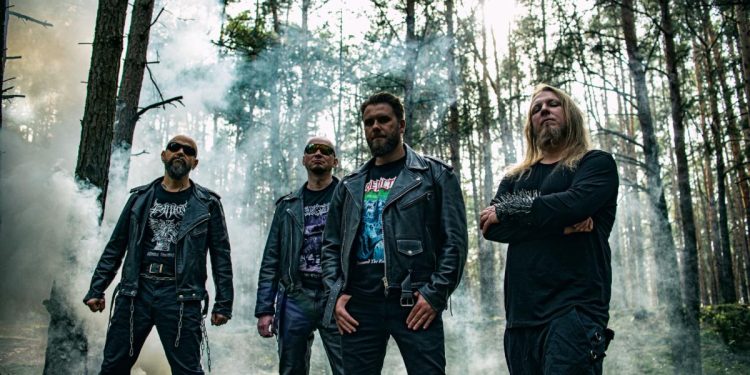 Polish death metal crew Dira Mortis has just issued an official video for “Forward To The Abyss Of Misanthropy,” a track from their recent album, Ancient Breath Of Forgotten Misanthropy, released at the end of 2020 through Selfmadegod Records.

On Ancient Breath Of Forgotten Misanthropy, Dira Mortis delivers seven massive tracks of classic death metal tracks influenced by the likes of Incantation, Immolation, and Autopsy. The album was recorded, mixed, and mastered at Roslyn Studios with producer Krzysztof Godycki (Kult Mogil, Morda Stigmata, Stillborn, Ulcer), and completed with cover art and layout by Bartlomiej Kurzok and photos by Marcin Studzinski. The album’s intro and outro were produced by Lukasz “Zenial” Szalankiewicz with Elene Aladashvili on vocals, and the track “Twilight Of Divine Purgatory” features a guest solo by Uappa Terror.

The new video for the album’s “Forward To The Abyss Of Misanthropy” was produced by Rafał Chmielewski (Shock Studio) and Marcin Studziński (ChaosSfera). Dira Mortis guitarist and frontman Leszek Makowiecki comments, “It is a simple video with a nod to the ‘90s and a symbolic reference to the lyrical and graphic concept of our latest album.”

Dira Mortis Video for “Forward To The Abyss Of Misanthropy”

Dira Mortis came into existence in 1998 in Gorlice, Poland, and continues to serve a powerful dose of ominous cemetery stench death metal. To date, the band has released records through the likes of Defense Records and Let It Bleed, with two full-length albums among a long line of demos, EPs, and more fleshing out their discography. In 2014, a compilation featuring the band’s early demos called Rusty Razor Cuts was released, and the following year, the band released their second album, Psalms Of Morbid Existence , which was highly appreciated in the music press and was promoted on many shows in Poland. Dira Mortis has played live alongside the likes of Marduk, Immolation, Parricide, Deformed, Antigama, Hypnos, Patologicum, Terrordome, and Chaos Synopsis.

“It’s entirely possible that DIRA MORTIS do wish peace on earth and good will among men and women but judging from the album it’s also likely they don’t believe that will happen naturally or through divine intervention. It will require a determined fight and an unquenchable spirit, and this raging, riotous, yet somehow even poignant album would make a good soundtrack for what is required.” – No Clean Singing

“The colossal, seething sound grabs you right away. It has everything. Meaty, churning riffs, which drip with dissonance and sonic filth yet retain a melodic edge. Focused blast beats and swirling tremolos, moving forward while staying in place. Screaming guitar leads and solos that might make you wonder whether a resurrected Jeff Hanneman was playing here. Insane and continuous tempo changes and breaks. Growls trapped between black shrieks and brutal death metal growls delivered from abyssal depths.” – PopMatters

“…death metal at its very best… a very unique album. Their sound includes a number of elements from different subgenres which generates a darkness that is rarely released on death metal albums. All band members deliver outstanding individual performances resulting in a totality of the album that is even better. 9/10” – Metal Temple

“This is a hellaciously heavy record. Death metal tinted with blackness and doom, focused on the absolute crushing the percussion can cause. Its headache inducing crashes and bangs are accompanied by controlled bursts of speed and sharply splayed guitar squeals and hooks.” – Games, Brrraaains & A Head-Banging Life

“…a bleak unflinching OSDM style neck-snapper, with the requisite ghastly vocals, furious drums, but also with a ton of sophisticated riffs and licks to serve notice to modern tastes.” – Ghost Cult Magazine