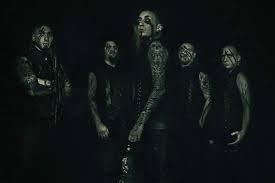 With a strong determination and passion to achieve a positive and influential impact on one of the most important and crucial topics of today’s world, vigorous metal quintet Decline The Fall unleashes “Think Twice”– a project that aims to fulfill a purpose much more significant than the conventional standards within the industry. The newest single by Decline The Fall (off the band’s most recent full-length album – “Our Own Demise” – out now) is based on the crucial topic of mental health, as the powerfully presented music composition simply acts as a method to not only express the members of the band’s personal thoughts related to the topic, but to also bring awareness to the growing negative results in terms of people suffering with mental health issues nowadays. Containing an immediate, direct and thoughtful nature in terms of sidestepping the pitfalls common in the metal genre, “Think Twice” utilizes a fast and well-paced combination of aggressive and melodic vocal lines and thoughtful instrumentation to perfectly represent the variety of emotional states related to the topic of mental health, further expanding the group’s sonic palette and music arsenal in enough directions to keep the overall product to aesthetically pleasing levels of the highest degree.

Providing further information about the purpose of “Think Twice” and its main goal, Decline The Fall comments: “The song focuses on the effects of depression and to how it can take a toll on us, to the point of considering suicide. We decided to release it just when the majority of the world had just gone through 1 or 2 months of lockdown and the statistics of those suffering from depression and suicidal thoughts had risen exponentially. We also promoted the Maltese Helpline towards the end of song, where we wanted to give hope, or courage, to those who have been suffering, that help is always within reach and that they are not alone. We wanted our music to be comforting, yet to be an alarm and a voice.”

“Think Twice” is the second single off Decline The Fall’s latest full-length album – Our Own Demise – now out everywhere.