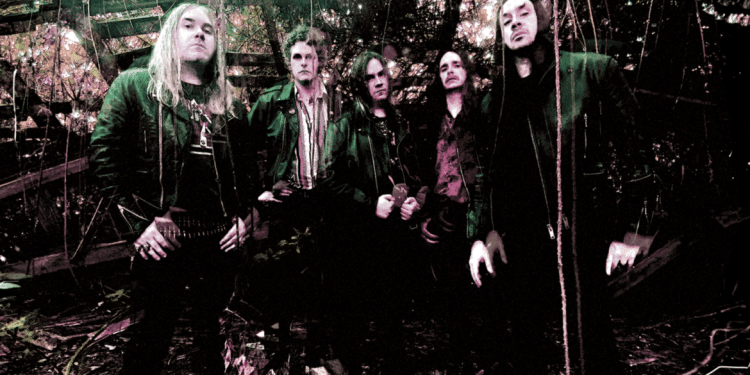 Dark Mediation may hail from Seattle, but their sound is steeped in traditions associated with other corners of the globe — England’s working-class cities, frosty Scandinavian towns, Southern California meccas of the ‘80s. Or as the band puts it, Dark Mediation sounds like the bastard amalgamation of Venom and Judas Priest fighting it out on the Sunset Strip while Danzig and King Diamond cheer them on. While such reference points may suggest a nexus of evil kitsch and arena-level theatrics, the band’s debut album Polluted Temples comes from a place of down-and-out urgency and punk ethics, adopting the gloomy anthems and riff worship of heavy metal titans for their sonic exorcisms rather than their rock n’ roll panache. It’s an album that basks in big hooks, righteous guitar work, and an arena-level stomp without compromising any grit, grime, or guts.

Comments the band of first single, “Haunt Of Fear,” now playing at Decibel Magazine, “‘Behold the Devil and He appears’… ‘Haunt Of Fear’ deals with the concept of creating a ‘devil’ or a problem you may fixate on to serve as an invented boogeyman, where fear governs your mindset and instills hatred or provides a scapegoat on why you can’t move forward with your life. Musically, it’s a thunderous foundation of first-wave black metal riffage, wailing pinch harmonics, and dueling guitar solos.”

Adds Decibel, “‘Haunt Of Fear’… is more akin to Mercyful Fate musically, though without all the falsetto wailing. In fact, if you want solid reference point, consider Sweden’s In Solitude circa Sister, as there’s a bit of goth mixed into the trad metal mix, as well. This is a band that’s confident in the path it’s following, and it isn’t a well-worn one. Polluted Temples, which is set for release January 28, actually gives us hope that 2022 has some upside beyond, ‘at least it’s not 2021.’”

Originally conceived by vocalist A.D. Vick, guitarist Rane, and guitarist/synth player Ian as a recording project intended to provide personal catharsis, Dark Mediation came to serve as a crucial artistic outlet for the entire five-piece band — a salve during trying times. Along with compatriots JW Mullett (bass), and Will Klintberg (drums), the founding trio poured four years of blood, sweat, and equity into Polluted Temples, though the inner-band relationships go back even further. The members of DARK MEDITATION all cut their teeth and crossed paths in various niches of the underground, churning out visceral and vitriolic bangers in acts like Emeralds (SEA), O.S.S., R.I.P., and Wildildlife. A punk ethos permeated their earlier acts, and while they may have excised some of that primitivism in their current project, the members of DARK MEDITATION have not skimped on the aural punishment and physical intensity.

Recorded over two weeks during Seattle’s record-breaking heatwave of June 2021 by Matt Bayles (Mastodon, The Sword, Soundgarden), Polluted Temples is the culmination of nearly half a decade’s worth of work. Not only does it represent a triumph over recent adversities, it serves as a negation of ingrained prejudices and social mores. “Most of our songs deal with personal consequences of our actions and how it effects the world around us,” Vick says of his lyrics. “But there is also the looming specter of evangelical Christianity that I was brought up in and trying to break away from the dogmatic concepts that were pushed upon me in childhood.”

These themes are displayed on songs like “Haunt Of Fear,” where Vick explores the idea of the devil as an invented boogeyman used to govern by fear and instill hatred in the populace while the band lays down a thunderous foundation of first-wave black metal riffage, wailing pinch harmonics, and dueling guitar solos. On a similar tip, the album’s title track—a perfect blend of melodic gloom and pounding force bolstered by synth-colored choruses and heroic guitars—uses the biblical metaphor of the body as a temple to examine how physical pleasure-seeking turns people inward and away from the rest of humanity. This kind of social commentary manifests in the relentless chug of “Babalon.Money.Magick,” where the increasing disparity between the haves and have-nots is reflected Seattle’s new construction and tent cities. And it pops up again in the mid-tempo death rock strut of “Desolation Days,” where manipulative institutions and power-hungry people are brought to task for valuing the dollar over human lives.

Ultimately, Dark Mediation’s true power lies in their razor-sharp musicianship, addictive songwriting, and fist-pumping instrumentation. It’s no small wonder that the band’s early demos warranted an official release by Austria’s boutique black metal label Doctrina Carnis before they’d even played their first live show. Polluted Temples marks a substantial progression in both performance and production, and with that evolution comes the requisite support of a strong stateside label. [Bio by Brian Cook]