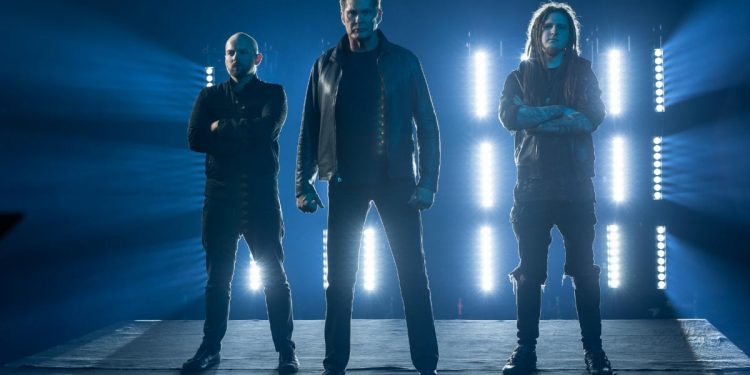 Cuestack collaborates with David Hasselhoff and the Austrian metal duo has revealed a new guitar playthrough for “Through the Night,” the band’s much-talked-about track with TV icon.

Watch guitar shredder Bernth Brodträger as he takes viewers through the recently released single in a video available today via Guitar World at https://www.guitarworld.com/news/watch-bernth-brodtrager-tear-through-david-hasselhoff-led-cuestack-shred-a-thon-through-the-night-with-onscreen-tabs.

“The song was originally written for six-string guitars in E standard, but I chose to replace the original rhythm tracks with a seven-string tuned to A standard,” says the Vienna Music Institute graduate. “That gave the song a bit more bite without changing the arrangement completely. I couldn’t go to the extreme with my shredding and progressive influences because we wanted the song to appeal to David’s fans as well, but I still added a challenging solo with one of the fastest lines I recorded so far. It was a fun challenge to compose this song and to work with David – an experience I will never forget!”

Fans will recognize Brodträger from his online shred videos, which have amassed over 200,000 subscribers on YouTube and 215,000 followers on Instagram. He has also released online courses such as 10 Steps to Modern Shredding and Sweep Picking Masterclass that teach the next generation of shredders about advanced techniques and music theory.

Born in Wiener Neustadt, Lower Austria, Brodträger began playing guitar at the age of 13. After his first private lessons, he signed up at a local music school to start his career, then started touring with extreme metal bands like Belphegor , playing concerts and festivals around the world. After a couple of years of only playing metal, he decided to broaden his horizon and to study Jazz guitar and instrumental pedagogics at the Vienna Music Institute. Brodträger finished both programs with honors after four busy years.

During his final years at the Vienna Music Institute, Brodträger started working with the Austrian band Seiler und Speer . They put out three number one records in Austria, four top 10 hits, and played sold-out concerts like the legendary Donauinselfest, where they performed in front of over 111,000 people. During that time, Brodträger also received two gold awards for composing and performing the soundtrack for two seasons of the successful series Horvathslos .

Brodträger was introduced to Hasselhoff by his Cuestack partner Martin Kames in 2018. “I was surprised to hear about his interest in rock and metal music,” he says. “He listed Metallica, Iron Maiden, Killswitch Engage, Marilyn Manson and other bands as favorites, and we talked about making a metal song together. I recorded some demos right after this meeting, ‘Through the Night’ was the first idea I had back then. The song is essentially a fun over-the-top fusion of classic metal elements and David’s powerful voice. He is a trained musical singer and I love the dramatic touch he added to the song. It all came together as soon as he entered the studio with us near Vienna. Hearing the song with his vocals for the first time was a surreal moment I will never forget! Our producer Daniel Fellner – who is currently finishing the production of my upcoming solo album Elevation – played a big part in finding the right sound for the collaboration. Of course, we wanted it to have a retro vibe, but it also had to sound modern to fit the Cuestack catalog. We achieved that with added electronic elements and experimental drum layering, going for an industrial touch.”

Tabs, guitar pro files and a backing track for “Through the Night” are available on Brodträger’s Patreon at www.patreon.com/bernth.

The collaboration between the Austrian duo and the TV idol started in 2018 and what seemed like an impossible idea slowly turned into a reality. The ultimate goal was to create a metal project with the most-watched man on TV, showing the world his heavy side. Hasselhoff recorded the track with Cuestack in 2019 in Vienna, where they also shot this epic music video together. Cuestack conjured up a dystopian Sci-Fi world in the music video for “Through the Night,” continuing the cinematic style that was established with this year’s first single “Transhuman Generation.” Watch the video at https://youtu.be/8RmG6ojUh_M. (See the full background story on the collaboration below.)

About Cuestack:
When the worlds of eccentric lighting / VFX designer Martin Kames and shred guitar content creator Bernth Brodträger collide, explosive music and art manifest in the form of Cuestack. An unmistakable blend of metal and electronic music with well established sonic trademarks is the result, paired with an industrial, dystopian corporate identity that is ever-present in the band’s cinematic music videos and artworks.

The first full-length Cuestack album, Diagnosis:Human, will be released in 2021.