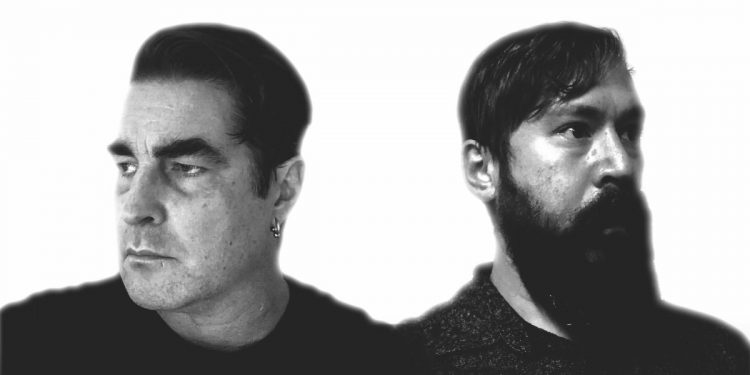 Collapse Culture single “Disabuse” is available for streaming via BrooklynVegan. The duo’s namesake album is due out late January through Pax Aeternum.

Formed during the start of COVID-19 quarantine, ollapse Culture is a long-distance collaboration by Graham Scala (Bleach Everything, US Christmas, Interstitia) and Ian Miller (Kowloon Walled City, Strangelight, Less Art) that started as an attempt to step as far out of their comfort zones as possible by making a dance record. The process was originally something of a distraction while it felt like the world was falling apart outside their door and therefore the result was something darker, spacier, and more disorienting than intended – a hazy, washed-out expanse of ambient-inflected dub techno in the vein of Burial, Andy Stott, or Bill Laswell that would be better suited to dancing in the ruins of an abandoned temple in a country not found on any map than it would be for the club.

ollapse Culture’s eponymous debut features eight diverse, ominous tracks that meld elements of post-rock, dark electronica, and cinematic components. The record was recorded by Scala in Asheville, North Carolina and Miller in Oakland, California, with all mixing, mastering, and artwork handled by Scala.

With the premiere of “Disabuse,” Graham Scala reveals, “It’s funny because this was supposed to be a dance record. I was sitting around in my living room – out of work and under stimulated, unwinding my mental health by obsessively looking at disease rates and watching protest videos while adding bourbon to my coffee a little earlier every day. Part of being an overbearing music nerd is wanting to engage in everything I enjoy and, of all the different types of music I’ve made, I’d never made a dance record. Ian’s come closer so at least one of us had his bearings with this sort of thing but, while I could blame the zeitgeist (though I don’t want to lump this in with every COVID-19 record every other sad, bored asshole made in quarantine) or I could blame a general inclination towards the darker side of the aesthetic spectrum, I don’t think we succeeded in making something for the club. Maybe next time we’ll make something that doesn’t sound like society collapsing.”

BrooklynVegan writes, The band’s bio namedrops Burial, Andy Stott, and Bill Laswell as reference points for their music, and you can definitely hear that coming through in the dark, murky electronic sounds of recent single “Dead Channel” and the new “Disabuse’single.”