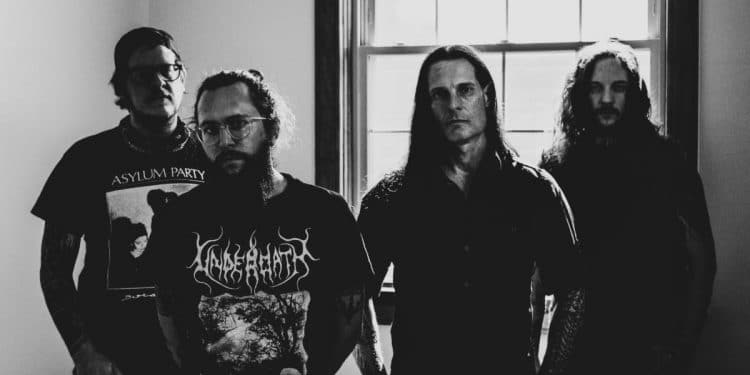 Chrome Waves third album The Rain Will Cleanse has been announced in addition to its cover art, track listing, a brief video teaser, and more ahead of the records’s September release through Transcending Records and Disorder Recordings.

Recorded at Postal Recording by Tyler Watkins and Disorder Recordings by Jeff Wilson, and mixed and mastered by Watkins at Postal, The Rain Will Cleanse is completed with cover artwork by Rebecca Dunski and photos by Luke Steffens.

The Rain Will Cleanse will see release on September 10th, with Transcending Records handling the CD and LP formats and Disorder Recordings handling the cassette and digital.

Chrome Waves was formed in the summer of 2010 by Jeff Wilson with The Gates Of Slumber’s Bob Fouts, after which The Atlas Moth’s Stavros Giannopoulos was brought into the mix in early 2011. The band self-produced their eponymous debut EP in July 2012. The vinyl quickly sold out in preorder and received critical acclaim and mentions outside the typical metal media, appearing in outlets like SPIN, Billboard, and others. They headlined a tour of the Midwest and East Coast US in August of that year, performing alongside Skeletonwitch, Morne, The Gates of Slumber, and others.

CHROME WAVES began writing their debut album in 2014, however, the members’ other projects kept the band from becoming the full-time project as planned. While the band remained mostly silent behind the scenes, Foreign Sounds reissued the debut EP on cassette in May 2015, and then reissued it on vinyl in September 2016.

After departing Wolvhammer and Abigail Williams in 2018, Jeff Wilson set out to finally make CHROME WAVES a full-time endeavor and brought in new guitarist/vocalist James Benson alongside the returning Bob Fouts on drums. With a renewed sense of inspiration, the revamped lineup immediately released several singles and their long-awaited debut full-length, A Grief Observed , on Wilson’s Disorder Recordings in early 2019. L ess than eight months after the debut LP, the band issued The Cold Light Of Despair , collecting several new tracks and cover songs. In March of 2020, CHROME WAVES released a split album with Gridfailure, and while they were immersed in the recording of what would become their second LP, the band tragically lost their friend and bandmate, Bob Fouts.

The group again revamped itself, welcoming drummer Dustin Boltjes and delivered their most powerful work to date on their second LP, Where We Live , released via Disorder Recordings in September of 2020. Yet, while the album was still in its pre-release promotion phase, Chrome Waves was already in the studio tracking album number three, The Rain Will Cleanse . The new album sees the lineup expanding to a four-piece, with the addition of bassist Zion Meagher.