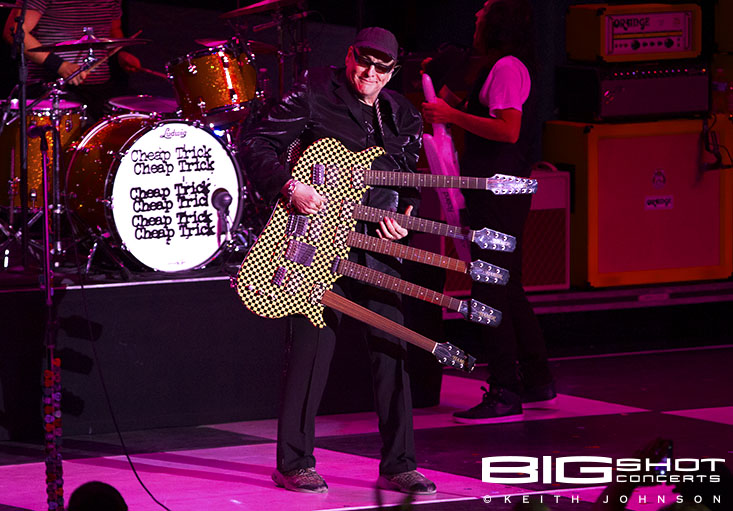 Mommy’s alright. Daddy’s alright. Cheap Trick is definitely alright. And the band proved it during a concert at Parker Playhouse in Fort Lauderdale, Florida by performing a classic set of tunes that have been mainstays in every era since the 70s. This quartet of rockers had the crowd at “Hello There” and continued to win their admiration by flexing some very talented musical muscles while exaggerating more than 35 years of on-stage moxie, which has always been undeniably unabashed.

Wailing guitar riffs, pounding drums and steady bass lines filled the venue as a leather-clad Robin Zander sauntered toward the microphone with all the swagger you’d expect from a lead singer with his storied stature. The frontman can still hit all the right notes, and his voice sounded crisp and clean the entire night.

His bandmate, the incomparable Rick Nielsen, is an extraordinary guitar player who takes his music seriously, but never himself. This duality made for an interesting dichotomy between pure musical ability and zany showmanship. Rick’s penchant for guitars was evident as every new song brought out a new model. There were guitar looking guitars, a guitar that looked like his Uncle Dick and the ever popular over-the-top guitar with five necks. True to form, Rick gleefully jettisoned guitar picks out to lucky fans the entire night. Sometimes one, two and three picks were just not enough. So he showered everyone close to the stage with handfuls of his colorful souvenirs.

Founding member Tom Petersson took the rhythm section to a new level with masterful playing of a totally unique 12-string bass. Melodic thumping might not do the sounds coming from his instrument justice, but that seems a rather favorable way to describe what was played. He also took a break from singing backup to take the lead on the softer and slower “I Know What I Want.”

Cheap Trick has some pretty recognizable drum beats, so it only makes sense that if the original timekeeper is no longer available, the sticks get handed down to someone who has been around the band his entire life. And that would be Daxx Nielsen, who crashed cymbals, kicked bass drums, rolled snare drums and tapped around toms with rockin’ precision.

Fans of Cheap Trick, seeing them for the first time, may have thought they were actually listening to a CD rather than a live performance. The sound engineering at the Parker Playhouse was that good. To date, the band has sold more than 20 million records, appeared on 29 movie soundtracks, recorded 40 gold/platinum albums and played more than 5,000 shows.

To paraphrase the words of a ticket scalper from Ridgemont High, “Who’s gonna forget the magnetism of Robin Zander or the charisma of Rick Nielsen?”

Nobody at this Cheap Trick concert, that’s for sure! 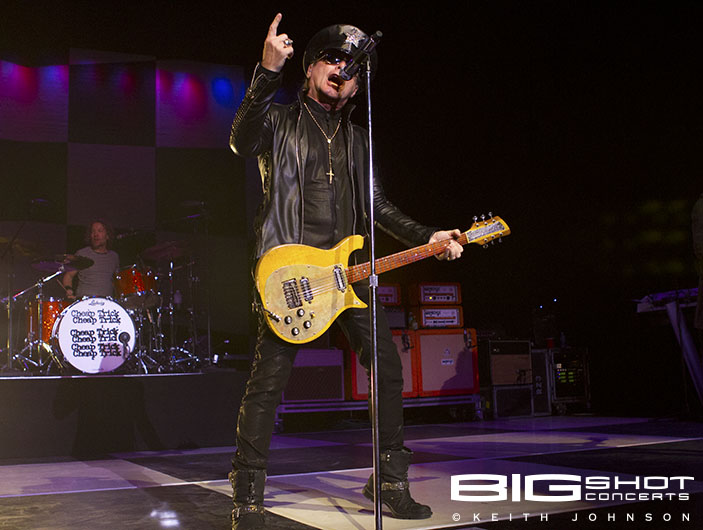 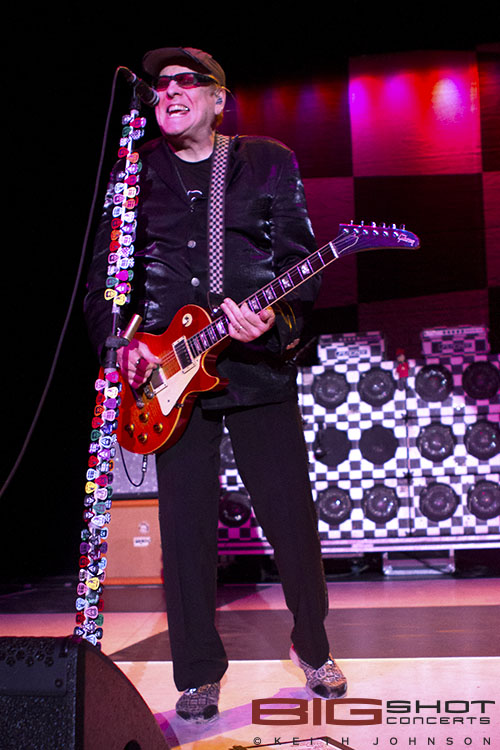 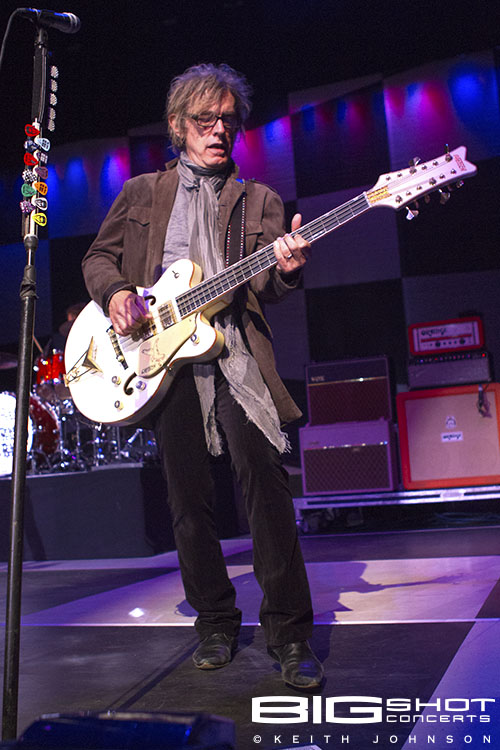 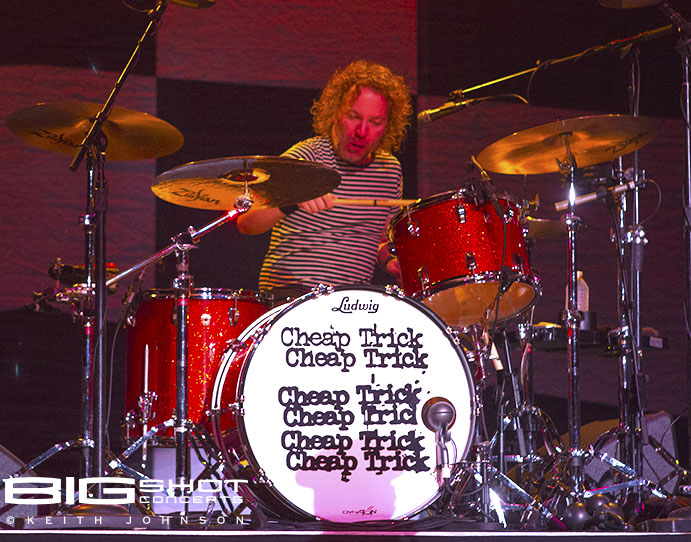 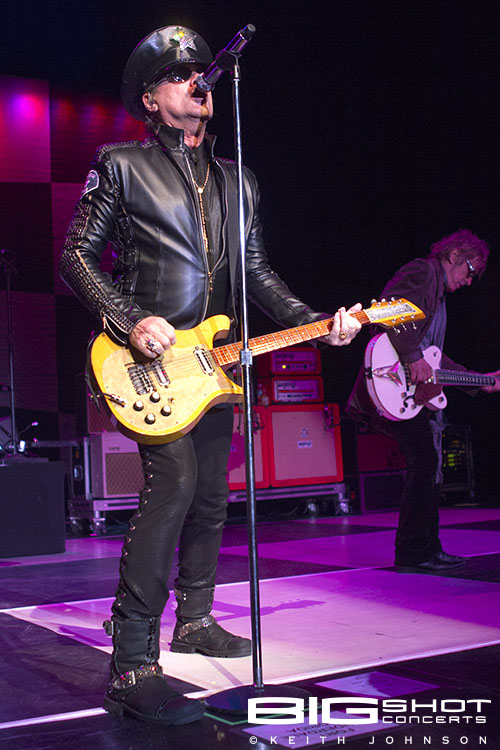 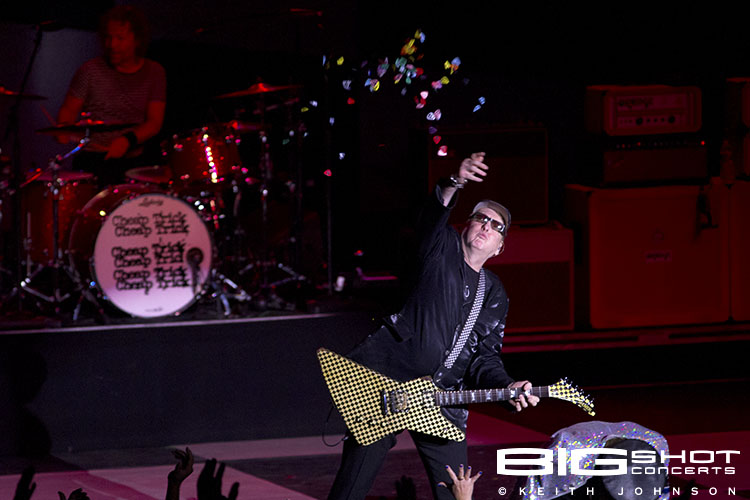 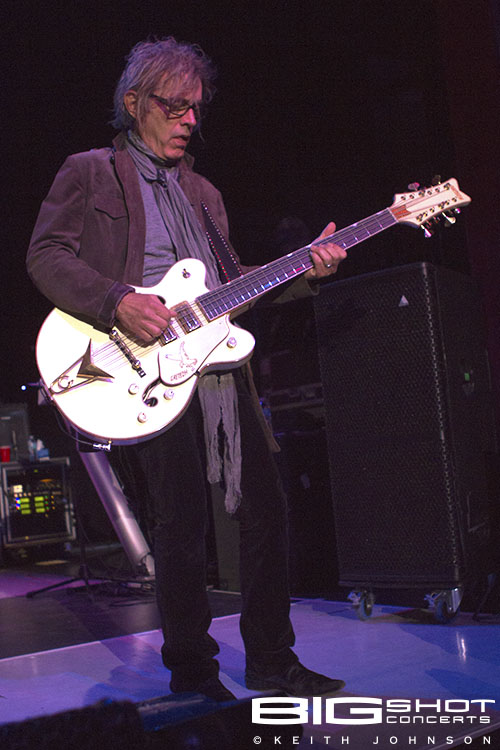 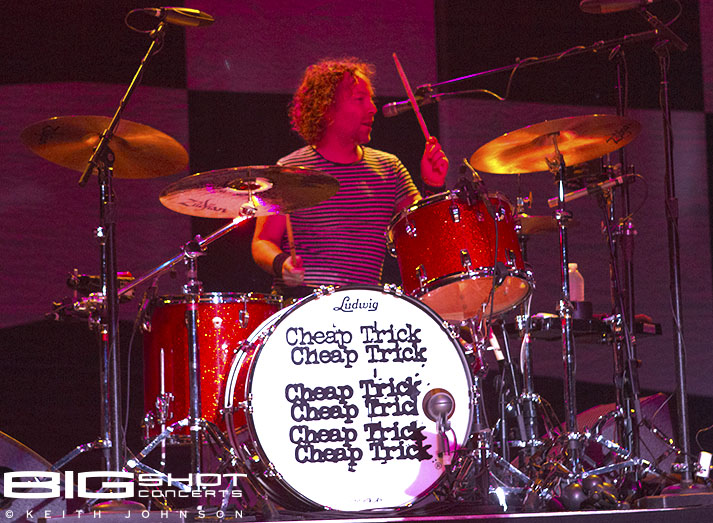 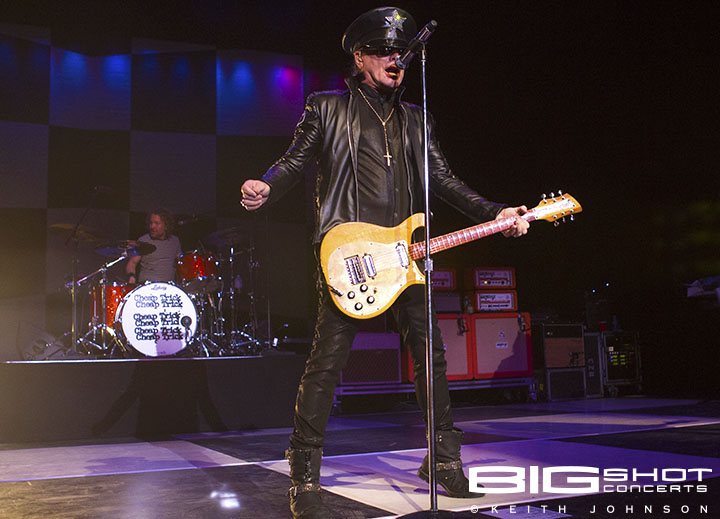 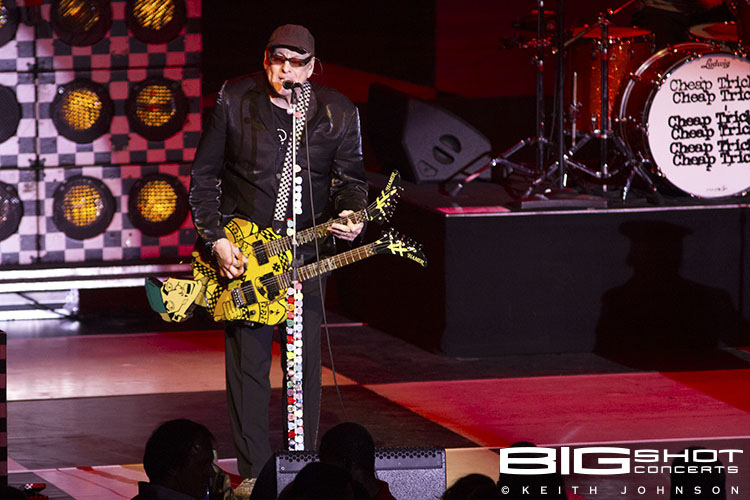 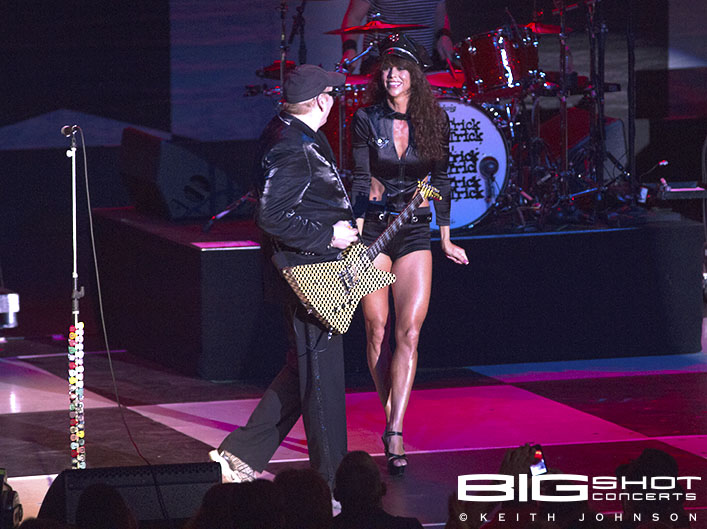 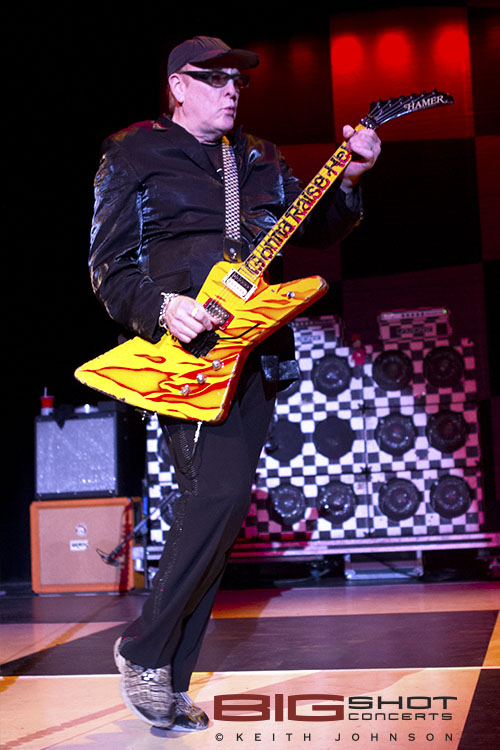 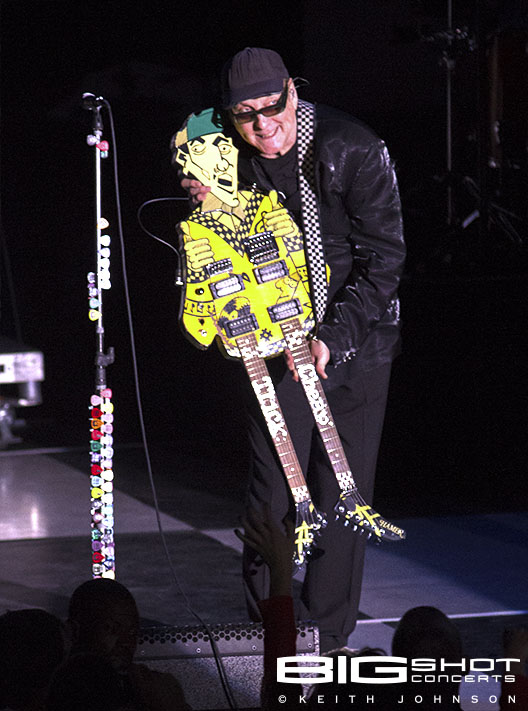 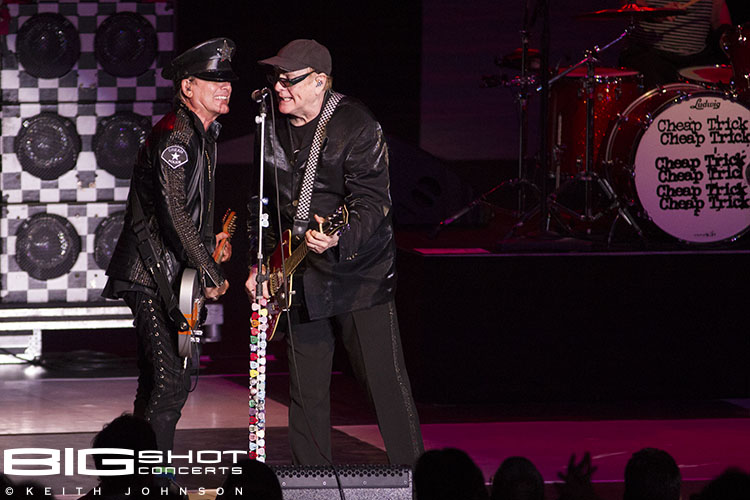