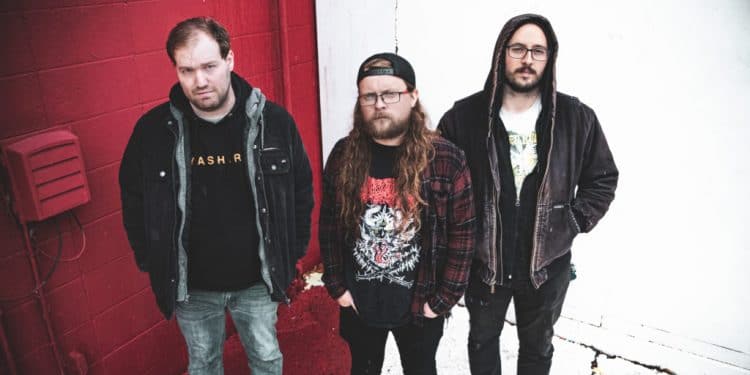 Arkansas hardcore/doom trio Bones of the Earth album II. Eternal Meditations Of A Deathless Crown will be released on April 2, 2021. It is the band’s second full-length.

Bound by a mutual love of medieval fantasy, sci-fi, and a desire to create uncompromisingly heavy music, BONES OF THE EARTH was forged in 2018 and immediately began writing material that would become their debut concept album, 2019’s I. The Imminent Decline Of Human Spirit . Weaving jagged hardcore tempos, dominating vocals, and sludgy riffs with post-metal ambiance across the entirety of its twenty-nine-minute run time, the body of work was composed with the intent to be performed in its entirety live.

This year’s II. Eternal Meditations Of A Deathless Crown was written as a continuation of that saga. Influenced by film scores, soundtracks, tabletop RPGs, and various mythos, the six-track recording delves deeper into the already established foundation listeners have come to know to be Bones of the Earth while seamlessly branching out further into sonic experimentation and narrative-driven lyrics.

In advance of the release of II. Eternal Meditations Of A Deathless Crown , the band unveils their first single, “Peaceseeker.” Notes the band of the climactic hymn, “‘Peaceseeker’ maintains the intense energy present in the rest of the album while giving the listener a glimpse into the now cold, dead world in which the chronicle takes place.”

Stream Bones of the Earth’s “Peaceseeker” at THIS LOCATION.

II. Eternal Meditations Of A Deathless Crown, which includes the entrancing artwork of Michael Steinheiser , was captured at bassist/vocalist Raif Box’s own Holy Anvil Recording Company and will be released on CD, cassette, and digital formats. For preorders, visit the Bones of the Earth Bandcamp page at THIS LOCATION .