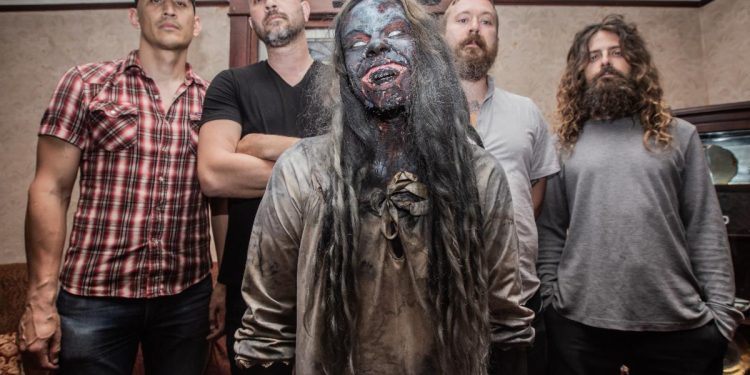 Bleach Everything horror double feature videos are simultaneously premiering for the tracks found on their “Bound/Cured” X-Ray flexi disc single, released through Dark Operative earlier this year. The premiere for the “Bound” video is hosted by Decibel Magazine, while Rue Morgue Magazine is hosting the “Cured” video.

The band writes, “‘Bound’ and ‘Cured’ were shot in historic Redondo Beach with our friend Nath Milburn of Lil’ Baker Films. Now that the air is getting colder and the sun continues to go down earlier and earlier, it’s a real treat to kick off our favorite time of year with a seasonally appropriate mini double-feature.”

Further examination of the paired videos from Bleach Everything reveals, “’Bound’ finds all of us trapped in an old, haunted house with the added terror of being isolated from one another. A demonic presence (played by Jenn Muse) stalks and toys with everyone’ psyche accordingly. We shot everything in a historic section of Redondo Beach, California using a vintage camcorder to mimic a lot of the direct-to-video creations that ourselves and Nath have enjoyed as horror and thriller fans for decades. ‘Cured’ wraps up the premise established in ‘Bound’ and ultimately documents our escape from the trappings of both the haunted house and demonic spirit that was holding us all individually and collectively captive. As an added bonus, we get to burn everything to the ground.”

Clocking at 1:29 and 1:08 respectively, both songs get in, get to the point, and then get out with razor-like precision, cutting exactly as intended. Thematically, “Bound” explores the uncertainty of luck and life and never truly knowing how it can, will, and can still shake out. “Cured” addresses the notion of figuring out how one must come to terms with the truth before death takes care of the task. It took you longer to read to this point than to experience both songs in their entirety.

“Bound/Cured” were recorded and mixed by Ricky Olson at the Ward in Richmond, with the vocals recorded by Brent Eyestone, and the tracks were mastered by Bryan Walthall at Stereoimage. “Cured” features a section of modular synth by Dash Lewis of Gardener, and the cover artwork was handled by Eyestone.

Bleach Everything is currently immersed in the writing for their second LP and multiple other upcoming recordings to be announced in the next few months.