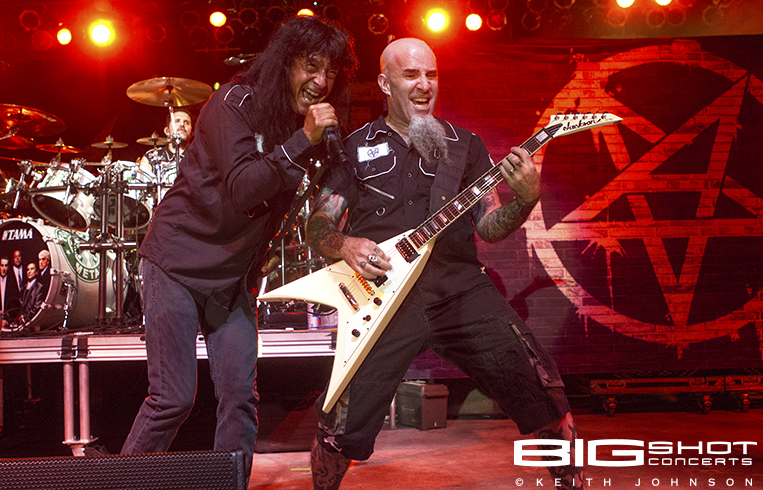 When you’re asked to open for the legendary Motörhead, you better have the bad-ass chops to rile up the crowd. And that’s exactly what Anthrax did at the Pompano Beach Amphitheater on September 26, 2015.

The thrash pioneers from New York City stormed the stage and turned the venue in Pompano Beach, Florida into a madhouse. Eager fans were already pressed up against the barricade waiting for their chance to get as close to the band as possible. With a feverish frenzy emanating off the fans like a spreading disease, the guys took it all in and delivered a sick performance.

The crowd showed their appreciation for the mayhem on stage by standing with fists raised high during the entire performance. It was classic Anthrax!

As expected, Scott Ian’s ferociously dextrous fingers waged war on his fretboard from the very first wailing riff. The guitarist and founding member of Anthrax shred chords and made his six string scream into the night. It was easy to see that Scott played off the fans’ enthusiasm, which made him even more energetic with each new song played.

With his half microphone stand in tow, vocalist Joey Belladonna cruised across the stage as he sang the songs every fan at the Anthrax concert knew by heart. Even after years of touring, he remains and energetic frontman. His zest for standing in the spotlight is only equaled by his desire to ham it up with the other guys in the band.

The heads of Charlie Benante’s kick drums were covered with two different images of goodfellas, a nod to the band’s consistent use of humor. In keeping with the theme, Charlie seemed to relish his role as the band’s hit man as he banged out rhythms from behind his kit.

Bass player Frank Bello seemed to be competing for which member of Anthrax could burn the most calories during the performance. He was all over the stage as well as up and down between monitors. And he did it all without ever failing his duties of holding down the low end.

The newest member of Anthrax is melodic axe crusher Jon Donais. Fans of the metal scene will recognize him from his days with Massachusetts-based metal outfit, Shadows Fall.

Anthrax played a set of classic tunes that included “Madhouse,” “Caught in a Mosh,” “Antisocial,” “Fight ‘Em,” “Medusa,” “In the End” and “Indians.” They even did a cover of “Neon Knights.” It was a rocking tribute to the late, great Ronnie James Dio during his days as a member of Black Sabbath.

Big Shot Concerts was at the show to provide live music photography and review the Anthrax concert at the Pompano Beach Amphitheater. 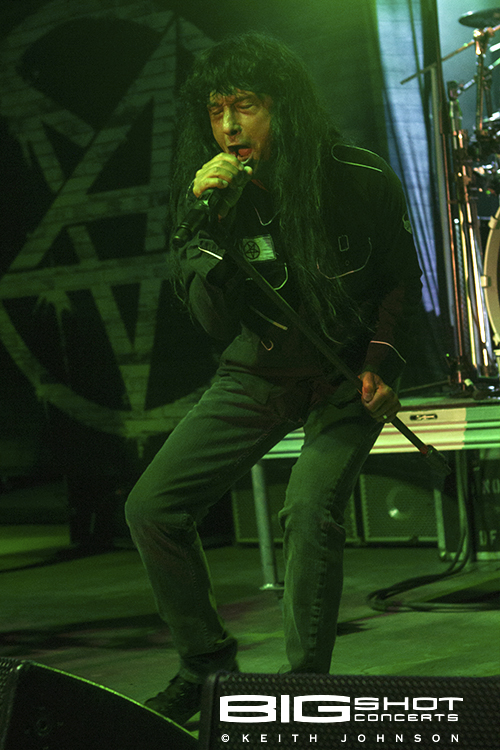 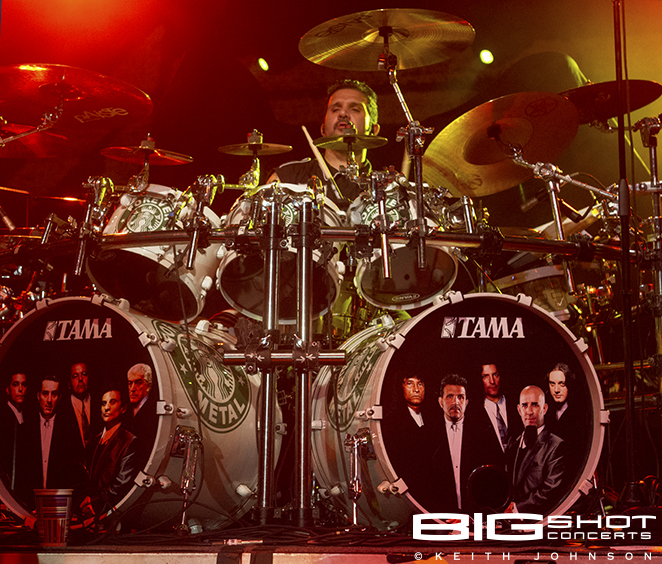 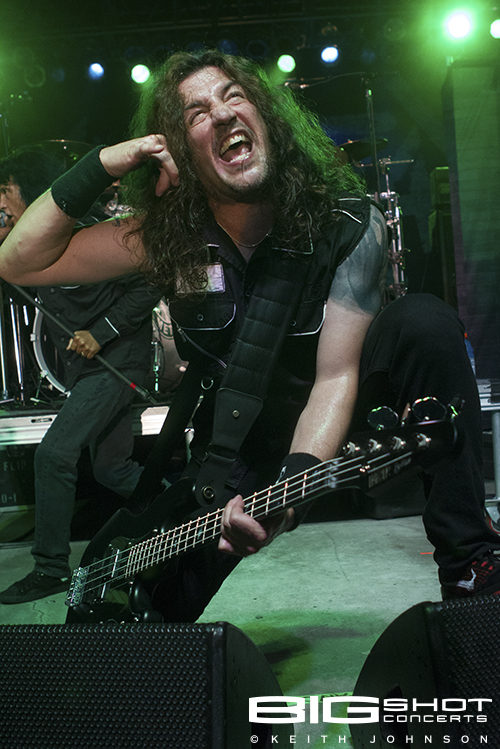 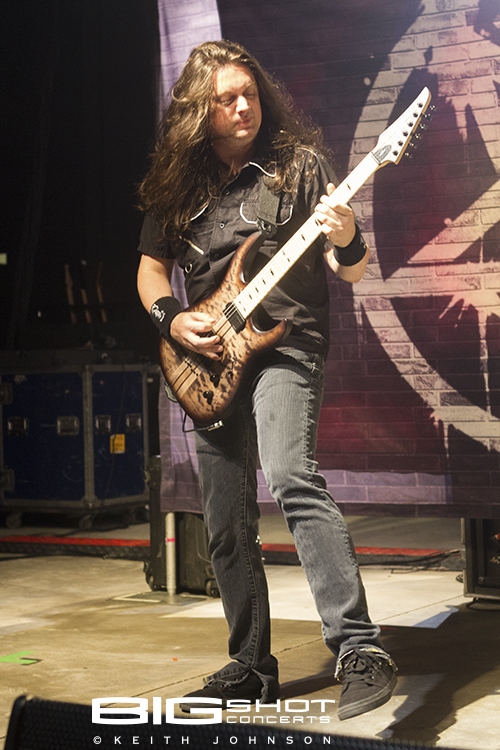 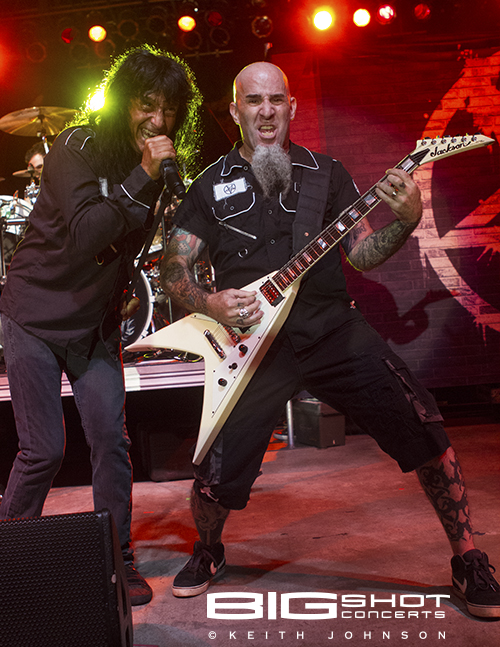 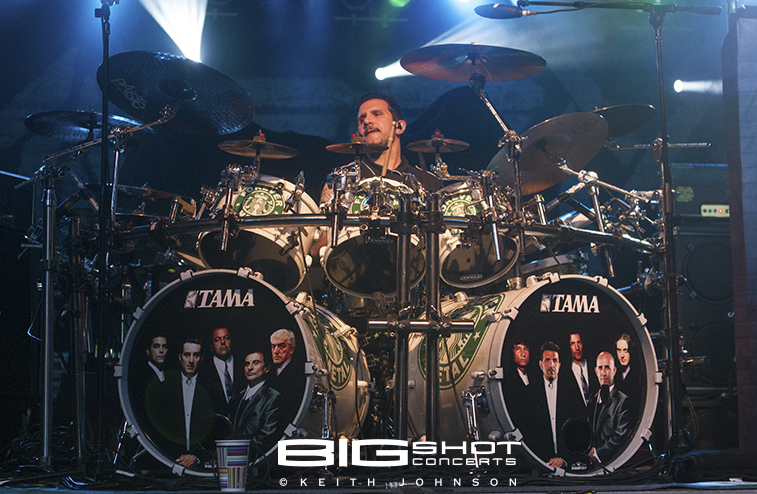 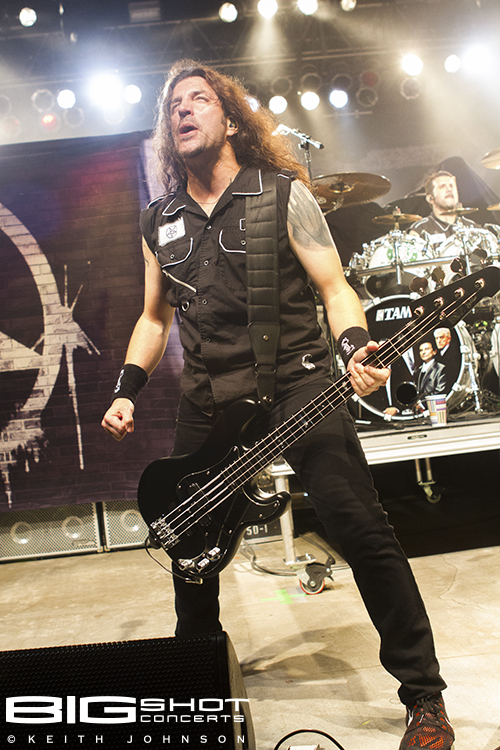 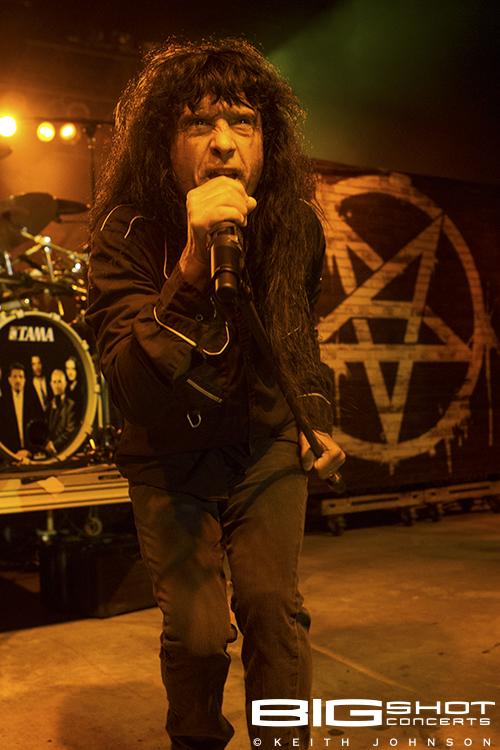 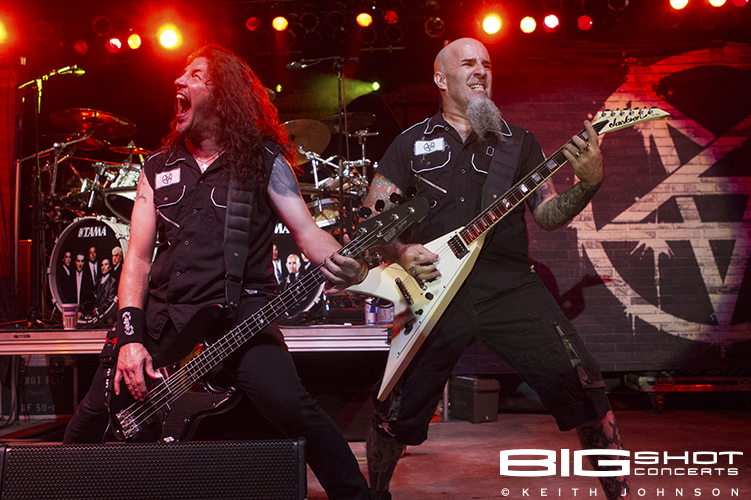 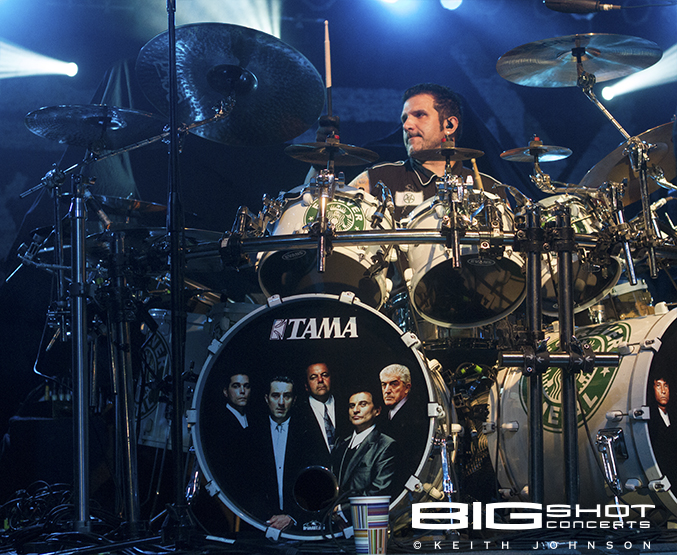 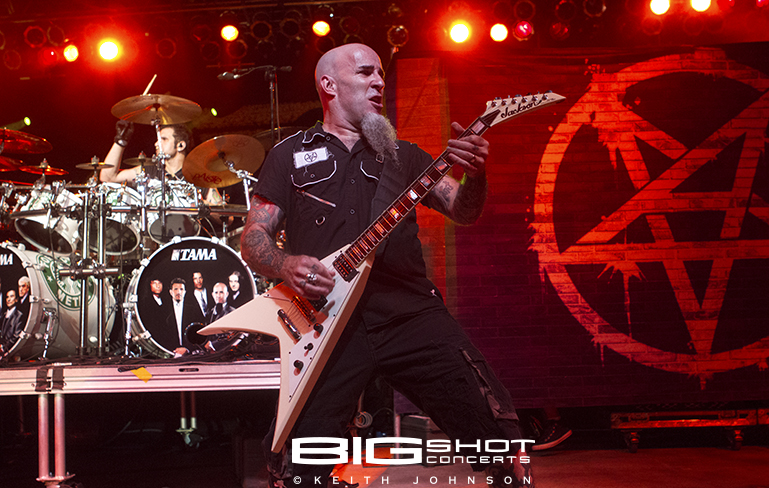 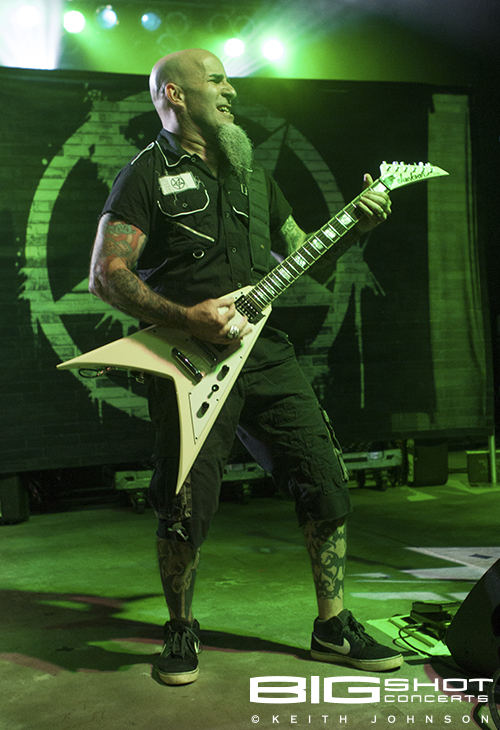 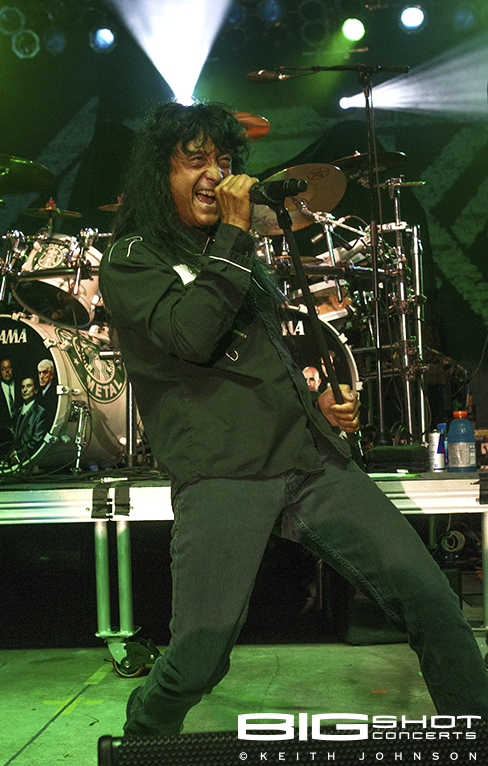 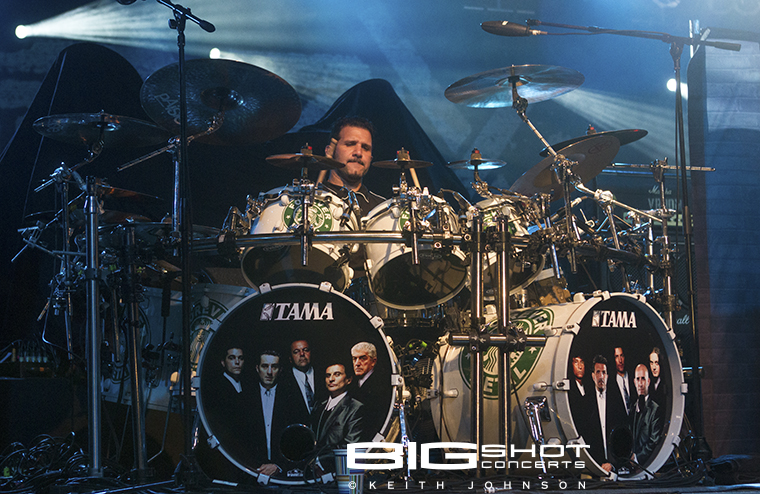 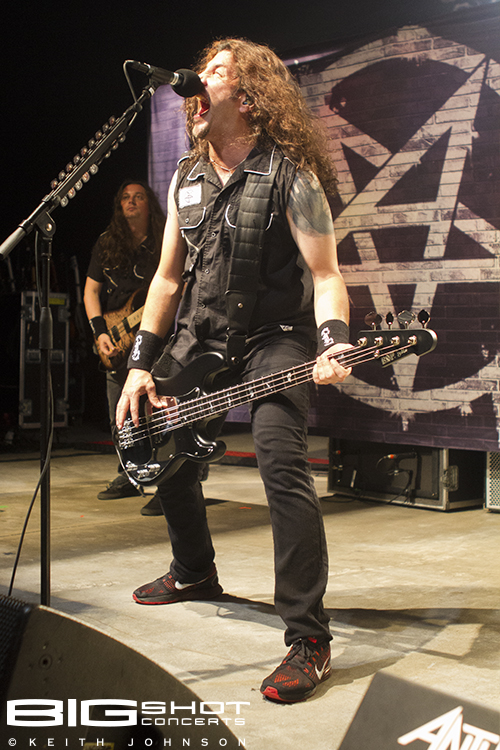 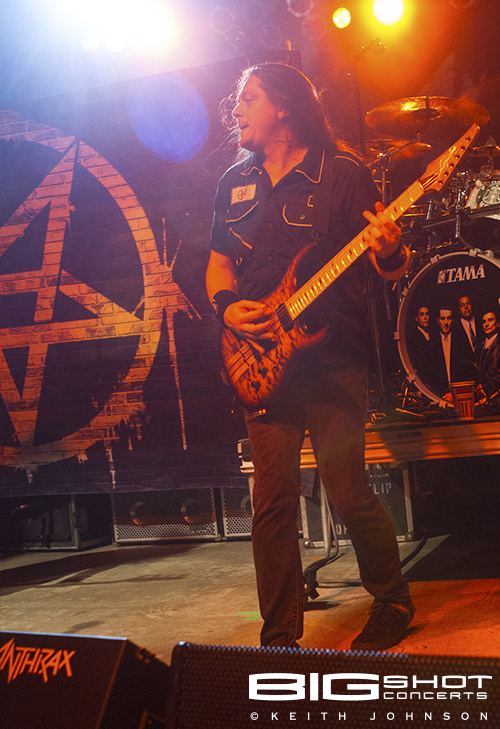 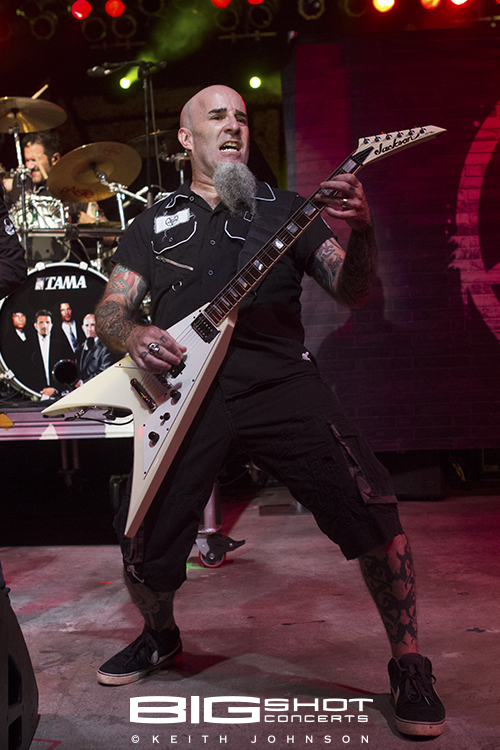