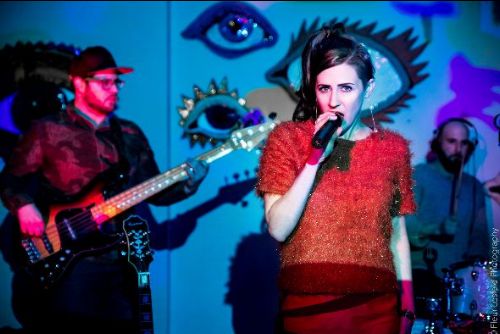 Los Angeles-based electro-pop artist Alarke (also known as Mary Alouette) has teamed up with multi-genre bass music producer Spiderhound to ring in the New Year with the release of her new dance single, “Real Down.” An uptempo track about escaping reality and enjoying a carefree night out on the town, “Real Down” marks Alarke’s return to the electronic dance music genre. The playful EDM track will be available on all digital platforms on Friday, January 8, 2020.
Award-winning artist Alarke is a singer, songwriter, music producer, artist coach and entrepreneur. Alarke’s career spans over two decades, multiple genres and several countries: from singing opera in castles in Italy, to performing Gypsy jazz with Romani musicians in France, to headlining shows at the famed Kennedy Center’s Millennium Stage and New York City’s iconic Rainbow Room. After a chance meeting with Sean Naughton aka Spiderhound in the Producer Dojo online community for music producers, Alarke collaborated with the producer on this new release. As her mentor, Spiderhound also served in shaping Alarke’s upcoming EP, out Spring 2021.

“Real Down,” the new single by Spiderhound featuring Alarke, will be available on all streaming platforms on January 8th. Follow Alarke on social media for more new music and exclusives.