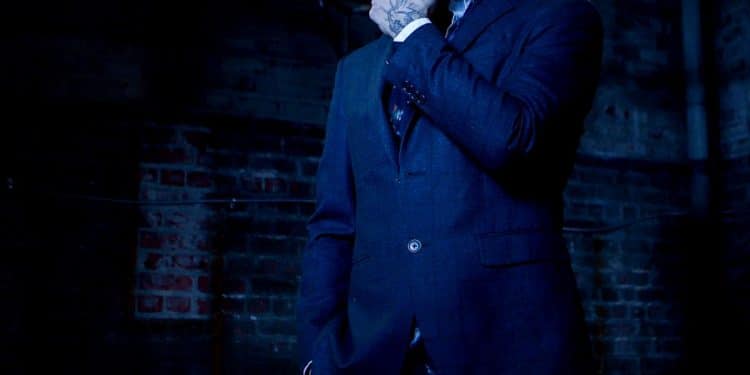 Watch the video for “Age of Regret” today via Loudwire at https://loudwire.com/best-dark-love-songs-aaron-thompson-small-hands/. While there, be sure to check out Thompson’s list of 10 Best Dark Love Songs.

“Often the hand that grants us our dreams also forever darkens our door,” says Thompson. “This is a song about how painful it is to make peace with a world that’s fed you beautiful poison since day one. You want to conquer the world, defeat your demons… but at what cost? This is the cost…this is the Age That I Regret.”

“Age of Regret” was mixed and co-produced by Jaime Preciado ( Pierce The Veil ). The Age of Regret EP is scheduled for release in June 2021. The single is available via all digital music providers at https://distrokid.com/hyperfollow/emptystreets1/age-of-regret.

Thompson grew up the son of a preacher in San Diego, California. From the moment he was gifted his first guitar, he turned from humming church hymns to playing the devil’s music on his six string. In 2003 Thompson stormed the San Diego music scene when he founded the band The Stranger’s Six , for which he was the frontman and songwriter. The band’s infectious live performance sold out notable venues like The Casbah, SOMA and House of Blues, and landed the group shared billing with the likes of 30 Seconds to Mars , TSOL , Panic at the Disco , Dashboard Confessional , The Misfits and The Cult . They were regularly nominated for “Best Punk Band” at the San Diego music awards alongside other local legends Pierce the Veil , Blink 182 , and The Locust . In 2007 The Stanger’s Six signed to Koch Records, and went on several US tours, including the Warped Tour.

In 2012 Thompson joined the band Fenix TX on their headlining European Tour, which covered over 20 countries. That year, Aaron also became romantically engaged with adult film legend Joanna Angel. Thompson first dabbled in the adult industry by writing original scores for her Burning Angel films. But as the pair’s lives became more entwined, he took on more and more roles in Angel’s production team until he eventually stepping in front of the camera as “Small Hands.” Within a few years, Small Hands went from co-staring alongside Angel to winning “Male Performer of the Year” awards from every single adult trade association: AVN, Xbiz, XRCO, Adult DVD Talk, The Alt Awards and The Inked Awards.

In 2020 Thompson returned to music with his solo project Empty Streets, which infuses his hardcore rock and roll roots with a darker, sexier edge. His debut, self-released record, Demons , pulled from a variety of heavier influences, including Nick Cave , Nine Inch Nails , Depeche Mode , VNV Nation , while also introducing a number of surprises. Thompson breathes strange life into Selena Gomez ’s “Love will Remember.” This beautifully dark and dangerously catchy pop album quickly climbed the Spotify charts and found its way onto every romantic goth playlist during the COVID quarantine. Thompson’s talents were soon recognized by Dillinger Escape Plan ’s Benjamin Weinman, who collaborated on EMPTY STREETS for the track “Fracas” on Weinman’s Patreon page.